At last: The E Book release of ‘Forever Night’ – Win a free copy!

October 25th 2016 sees the E Book release of Forever Night; the first book I wrote. Its been a journey that has taken two years from inspiration to publication, and its been one hell of a ride, and one I wouldn’t have missed for all the tea in China (As my Mother used to say)

Paul ‘Tank’ Williams suffered a horrific childhood but escaped his sadistic father and clingy mother by leaving home to join the army. There he excelled and became a decorated SAS soldier, serving in three tours of Afghanistan and Iraq.

On leave he meets and marries the one true love of his life, Amanda, and they are made for each other. But after he suffers a catastrophic head injury on a hillside in a battle where his squad are hopelessly outnumbered, he is returned home to Sydney, Australia and invalided out of the army. Doctors and Amanda try desperately to heal his wounds and return him to ‘normal,’ to no avail.

He now suffers irrational rages and insane jealousy, and when Amanda can take no more she flees across the country to Perth. Williams follows, and begins to murder and mutilate any woman who resembles her as he believes he is on a sacred ‘mission’ he must complete before his own lingering wounds kill him.

Detective Inspector Dillon Bradley heads a task force to capture the man the press have dubbed ‘The Perth Ripper’. But Williams wears disguises and Dillon feels like he is chasing a shadow. When he starts to get too close and makes the mistake of ridiculing Williams during a press conference He retaliates and wreaks havoc on Bradley’s life.

Williams cannot, and will not stop until he completes his mission. He is a highly trained killer, well armed, and totally devoid of feelings or remorse. Williams and Bradley are destined to confront each other, but Tank has decided he will not be taken alive and his training is far more advanced than the police’s.

Via my publisher, Totally Entwined, I have had the pleasure of working with several editors, who have helped more than words can describe to turn my vision of a maniac who lives among us, well disguised, into a page turning, unputdownable thriller. I can’t thank them enough for taking a chance on a new author (me) and allowing me to fulfil a lifelong dream. I hope people enjoy the read as much as I enjoyed creating it.

I have ten copies to give away in either EPub format, or PDF. Simply use the contact me link, put Forever Night as the subject and on the 15th of November I will draw ten people at random and send them a copy. If you don’t want to wait till then, you can order here via Amazon. Please send a review, tell me what you think, all comments are welcome. 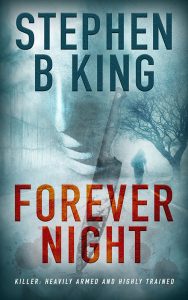