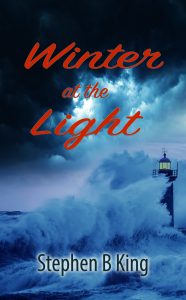 Publishing a book is a process, and a long one at that. A new author might think he/she is done typing THE END at the end of the first draft, but sadly thats only the beginning. I never perform less than five re-writes, leaving space and time between each to help gain some perspective (trying to see the wood through all the trees that get in the way). Then comes submission to the publisher, after writing a query. Don’t even get me started on query writing, suffice to say its a nerve-wracking time, not least of which is the art of condensing a 100,000 word epic down to a summation of three paragraphs – daunting stuff.

Some time back, I was driving to my day job, and an idea popped into my head, as they do with me at odd times. The thought was The Lighthouse Keeper’s Daughter. I have no idea where that came from, but I thought, what a great title for a book. Sadly when I got to work and Googled it, it had already been done, but I had never read it. The idea wouldn’t go away though, and slowly a plot idea of a young woman, minding a remote lighthouse for her father when he gets injured in order to keep his job grew. I envisioned a terrible storm, and a life raft washing up on the shore of our heroine’s island, and inside the raft…So, Winter at the Light was born.

My editor at my publisher, The Wild Rose Press, LOVED my submission, and so began that process. Contracting, edit rounds, giving the artist my idea for the cover, and writing the blurb, which has to go through a committee and in this case, was amended three times. Winter at the Light is now at the final copy edit stage, and once I sign off on that, I get a publication date and the book goes for pre-order at Amazon etc.

So, Dear Reader, her is the blurb: and how about that cover? Isn’t it stunning?

Forbes Lighthouse is a dangerous place. Twenty-year-old Molly McLaren agrees to tend the light when her father breaks his leg, so she leaves behind the city and her nursing career. Molly dreads the thought of three months as the sole inhabitant on the tiny island, nineteen nautical miles off the rugged coastline of Augusta in Western Australia.

Molly discovers she enjoys the solitude, and when a massive storm arrives bringing a life raft, Molly risks her life to save the unconscious man inside. On waking, he says he has lost his memory but as Molly nurses him back to health she wonders if he has. When the storm finally clears, Molly has fallen for the man she’s nicknamed John, but still has doubts about his honesty.

The real danger arrives with two men who are searching for her mystery man. They want to kill him and anyone else who can identify them, and Molly quickly learns; on a lighthouse, there is nowhere to hide.

Watch out for a release date.

PS, Geoffrey Boyes, narrator extraordinaire who performed my four audio books, also fell in love with Molly’s story, and is chomping at the bit for the final MS to produce a version. I can’t wait to hear it.

Thanks for tuning in