Jenny is a lonely university lecturer who’s consciousness has traveled back in time to her younger body to try to save the future of the world. A young microbiologist is going to release a genetically modified wheat that will mutate and ultimately destroy all plant life, leaving nothing but barren windswept dust bowls. In the past, Jenny finds a love that has been missing from her life; the kind that comes just once in a lifetime. But Jenny can only stay in that time period for thirty-three days. Meanwhile, in the future, fearful Jenny will fail, plans are made to send another back in time–an assassin. How can she choose between saving the man she loves or saving the future? 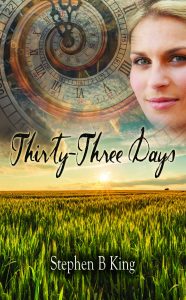 Published through The Wild Rose Press of NY I am thrilled to announce the release date will be 18th of July 2018. This story has been a labour of love for a very long time, and has picked up some fantastic early reviews, which has been very humbling.

Available as an Ebook and print via Amazon, Kobo, and iBooks, and print after the release date, or pre-ordered. As always I can be contacted to order a personally signed and endorsed copy of a first edition. Order via steve@stephen-b-king.com