Where do you get your ideas from?

When I’ve had the pleasure of talking to people who have read, or reviewed my books, two things are said to me time and time again. One is ‘I want to write a book too, one day.’ What do I say to that?  They say it as if it’s so easy and it makes me wonder if it really was. Ye-es it kind of is easy (I find) to write a first draft, but that’s when it stops being fun and exciting. Hopefully by then the story I’ve imagined actually works and the characters are believable and the situations they find themselves in not too farfetched. But, right there is where the enjoyment ends, and the really hard work begins. Second draft, then the third, maybe even a fourth. Then comes the editing (I get someone to help with that task; Alex you are a life saver! I can’t edit my own work objectively) Then when it comes back from editing you get a word document full of red markings, and every word has to be re-read and amended to use the proper format, grammar, etc.

And don’t get me started then on trying to find an agent, or a publisher who thinks your months of tireless work is even worth reading beyond the first page or two, let alone publish it. (More on this subject in a future blog)  Yet people, bless their little cotton socks, say, ‘I’ve always wanted to write a book.” Just like that.  Well, go for it, I always say. Far be it for me to stifle anyone’s creativity, and they may be on the verge of the next blockbuster, who can say? One thing is for sure, you have to really want to be an author, cos it isn’t easy.

The second and even more common one is “Where did you get your ideas from?” This is wonderful as I then get to pontificate for hours on end, or until their eyes glaze over, as I bore the pants of them. Seriously though, most people I talk to really want to know, and to be fair when I read a good book I want to know too. So for them, and anyone else who likes anything I’ve written well enough to want to know where the inspiration came from, read on………….. 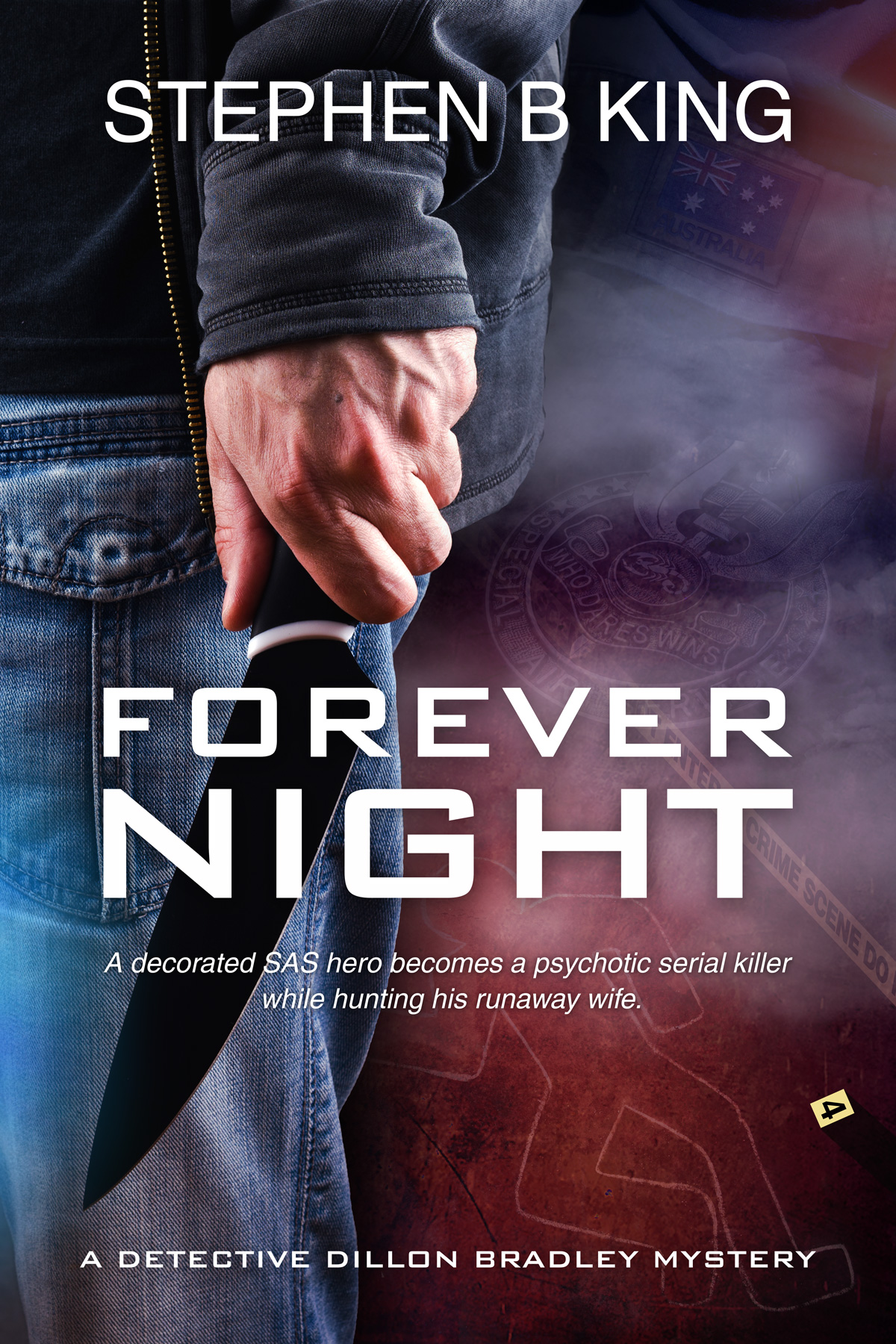 One line in a song did it for me. I will always be indebted to Leonard Cohen. My God if I could write one tenth as well as he can I’d die a happy man. The song is called ‘Never mind’ and it made my eyes pop open, my pulse race, and my brain tick over at three hundred miles an hour thinking…’what is this song about?” You know sometimes you hear the words, anything by Pink Floyd comes to mind, and you know they mean something but you really can’t figure out what? For me, Never mind is like that and I absolutely love it.

In particular, one line screamed at me: ‘I live among you, well disguised”. The more I thought about it, the more it resonated with me, and I began to wonder who would do that, and, why would they do it. To me the answer was simple, a serial killer would. I was so moved by that one line, for the first time in thirty years I sat down and wrote a poem, about a serial murderer, who preys on a certain type of woman while living among us well disguised; and it was chilling. I belted out twenty verses in a matter of minutes, and to me it worked in every area but one; there was no ending, he just kept killing. I tried, and failed to write an end to the story but it wouldn’t work in a poem format. After three days it was still bothering me because I had more I wanted to explore with him; a story with a beginning a middle and an end. My poor long suffering wife said, “Well why don’t you write it then?”

I had no thoughts or plans of writing a book, it could have been just a short story for all I knew, trying to burrow out of my head. I knew Paul ‘Tank’ Williams was a decorated war hero, trained in the art of killing – SAS no less. He received from us, the taxpayers that fund the army, the highest level of training in killing and survival, and he turned into a psychotic serial murderer. I tore into the task, and was writing five thousand words a day, it was an avalanche, and at times I felt like the story wasn’t coming from me, but through me.

Did I get his story right? I hope so. I wanted to explore why and how this man could kill so many people, so uncaringly, and, could I not only explain why and how he became that way, but also make the reader feel sorry for him, for the life he had that made him what he became. 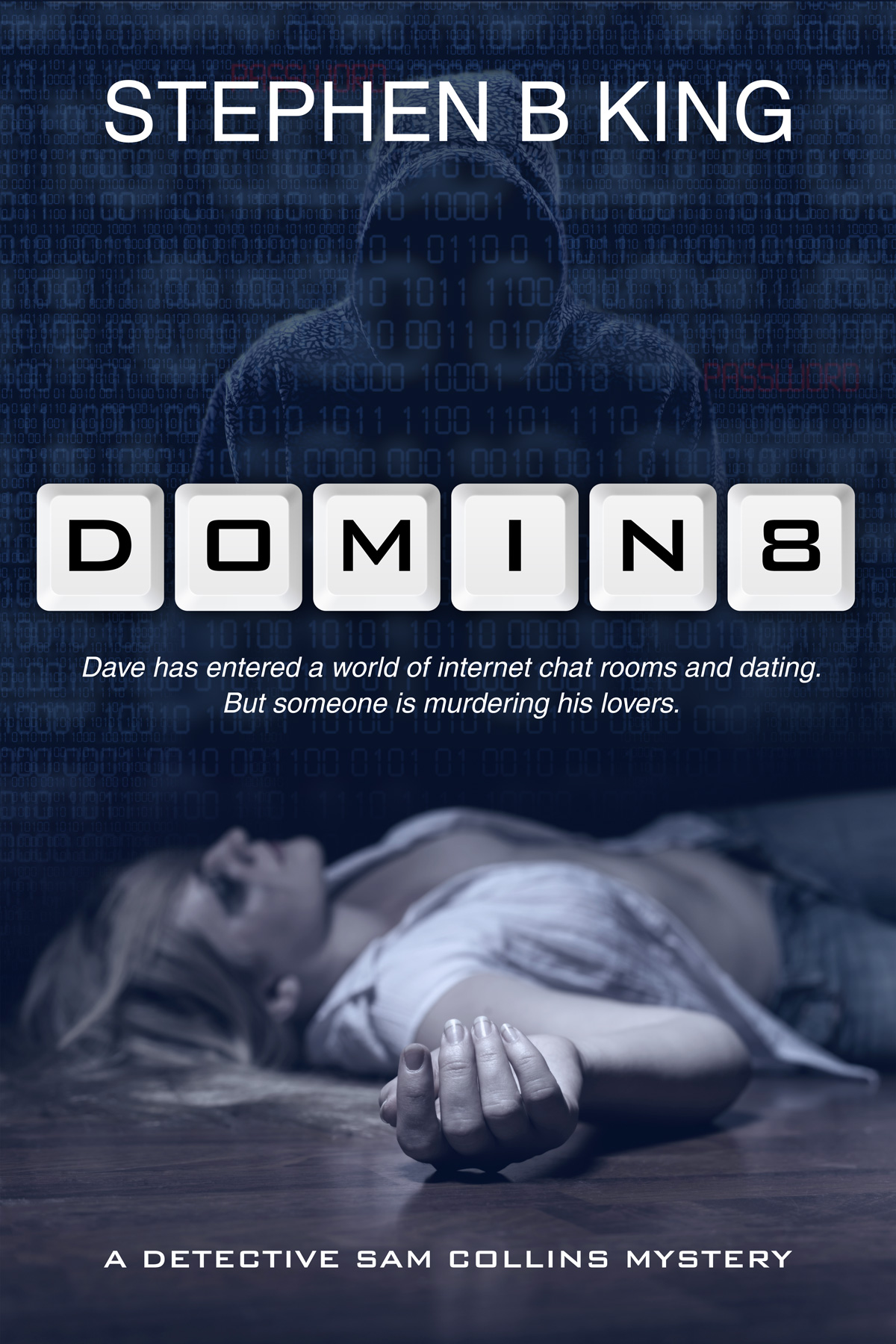 Two things happened in a relatively short period of time. Firstly I saw a TV show about a killer of women who lured his victims by posing as a Dominant male on a website that attracted submissive females. I remember thinking WOW, who would have thought submissive women would be tortured, raped and murdered? The second thing was when the story broke about the Web Site Ashley Maddison being hacked and millions, yes millions of married people, worldwide, who were looking for NSA sex, with other married people, got their information hacked.

The next thought I had was of this highly sexed married successful, man, his kids had left home, whose wife has lost her desire for closeness but they are still happy together, who gets drawn into the world of internet sex chat rooms, and meeting other married women for sex. But then someone starts murdering his lovers, and he is the prime suspect. From that starting point the story flowed.

The publisher that had contracted Forever Night allocated me an editor, to work with and she suggested one day it would be good to have a serialized police character who could give me a vehicle for more books, maybe even a TV series. I liked Sam Collins in Domin8 so I was thinking about how I could get him from the rank he had to the Detective Inspector I envisioned him as, and realized I needed two books to get him there.

Again two things happened quite close together. Firstly in Perth we had UBER arrive and launch an attack on our cab drivers, who had at that time an awful reputation for being late, not speaking English, being rude, etc etc. There had even been a couple of cases of cabbies raping drunken women. I have to say I had never had a bad one, but lots of people would say that they had. The second thing was an article in the paper about the increasing, often drug fuelled, violence which was occurring in our nightclub and entertainment precinct late at night. Out of the blue I thought what if there was a Vigilante taxi driver?

Obviously if there was one, he would have to have suffered some real and deep tragedy to make him that way, but then I thought what if he killed the wrong person and then wanted to stop because he had finally fallen in love. Could he stop, and if he killed the wrong person would he be permitted to just cease and have a happy life? In Nicky Pantella’s case, no he could not. 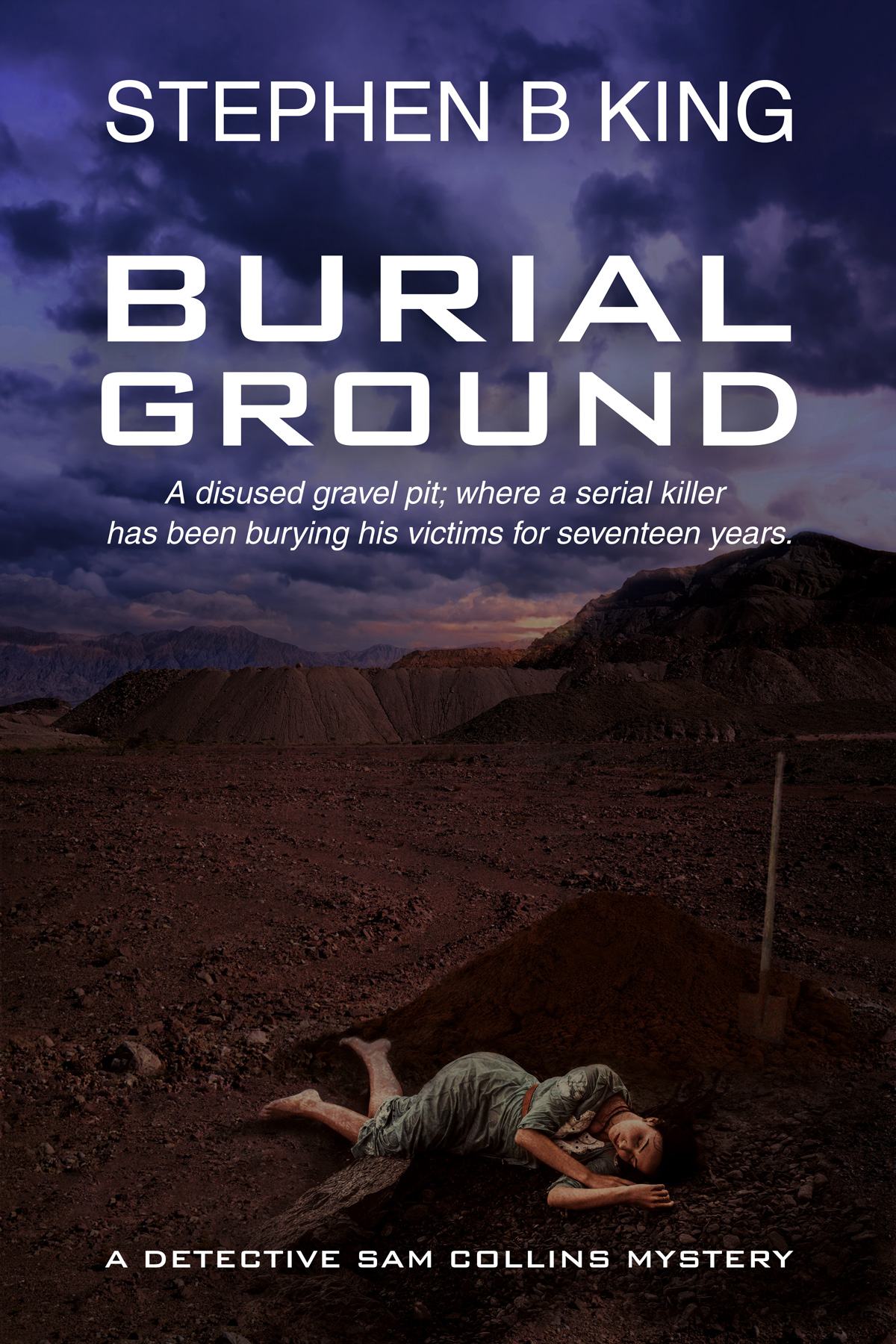 I was having a conversation with someone one day about Ivan Milat. He is the serial killer locked up in jail who was convicted of raping and murdering seven backpackers and burying their bodies in The Belanglo State Forest. The police believe he killed a lot more people but dear old Ivan isn’t saying a word. He won’t even admit the ones he was convicted of. I remember thinking Jesus, what if he had been doing it for years……..seventeen years for example, how many victims would that be?

I had been mulling over an idea for a short story of a young couple, who meet up at a party and sneak out somewhere to have sex but witness someone burying a body, and once again those two things came together in my head and I could see that this wasn’t one killer, it was two. Bloody hell, I thought, as if this were some news bulletin playing on the flat screen TV in my head. A father and son team of serial killers, raping and murdering  backpackers for seventeen years and burying the bodies in the same place? Suddenly I had the vehicle for Detective Inspector Sam Collins, the biggest case of murder in the country’s history. I bulked at the realisation the drain our resources a really, really big murder investigation would have.

The Belanglo State Forrest had been used so I opted for a little known, long disused gravel pit in the Perth hills locale of Rolleystone. A young couple are having sex on the back seat of his car and……………….. 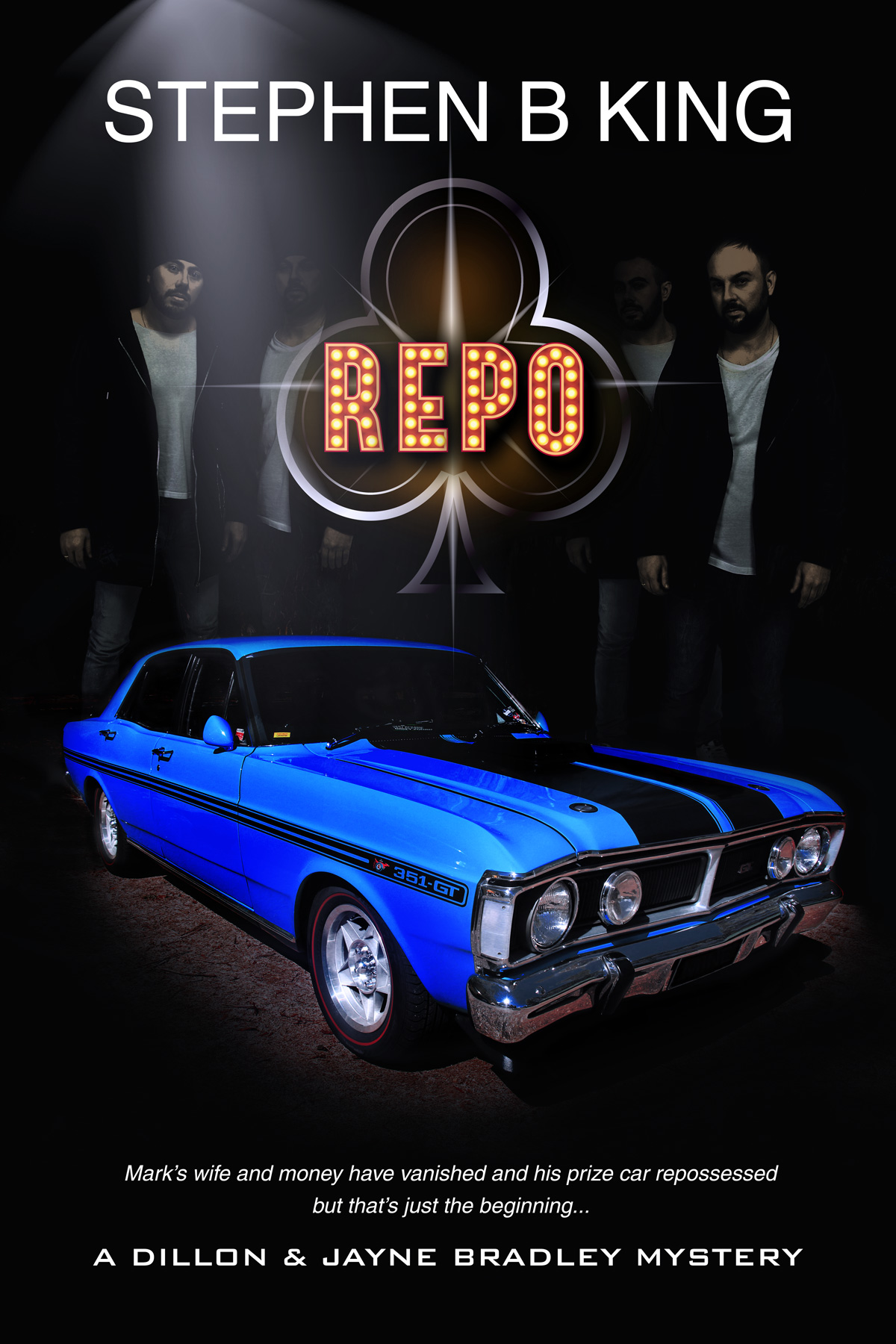 My son’s fiancé, Sam, works at the mines, as a driller, in unbearable temperatures, for a huge mining company, and we have had numerous conversations about her job. At work one morning the guys were talking about a movie that had been on TV the night before, The Repo Man, and the word Repo kept bouncing around in my head all day. Its one of thsoe words isn’t it? try saying it a few times, see what I mean?

Suddenly, while I was driving home, out of a field so far left its miles away, I had this mental image of a guy getting home after his two week shift up at the mines to find not only is his wife missing, but his car has been repossessed. And it’s not just any car, it’s a fully restored, 1971 Phase three GTHO Ford Falcon, one of only three hundred built and worth a fortune. His bank account is empty, the rent hasn’t been paid and all of his credit cards are maxed out and his wife does not come home, ever.

Driving home that night, it was raining as I recall, I remember wondering why she had disappeared, and where had all of their money gone, and it came to me……………………..She hadn’t dissapeared, she is dead, and then the next thought was, I bet the time of death is such that he is blamed for the death and is arrested for her murder.