Glimpse, The Beautiful Deaths (book 2 The Deadly Glimpses) will be released on the 10th 0f April 2018 and is now available to pre-order via Amazon here: CLICK HERE

I was asked, “Steve, why The Beautiful Deaths, death is never beautiful?” so it got me thinking. I wrote the following for a friend’s blog post to try to explain why, and talk a little about the book.

We use the word beauty in many different scenarios and situations, but could we ever use it to describe death? In Glimpse, the Beautiful Deaths, criminal psychologist Patricia Holmes, attached to the Major Crime Squad of the Western Australian Police Department does.

It seems to me to be over-used, and in some cases is completely opposite from what the word actually means. Patricia Holmes, asks us to consider beauty in its purest from. She describes a man who has an obsession to own and possess beautiful things so badly it leads to six cases of murder.

During a meeting with homicide detectives where she delivers the profile of the man they are hunting, she nicknames him Gordon. She urges the men to think of him that way; an ordinary man, not a master criminal or Serial Killer. She believes he doesn’t even consider what he has done to be murder and she poses the riddle to the men: When is a serial killer not a murderer?

The bodies of six young girls, each of them the epitome of beauty when they were alive, have been found in a cave system in the South of the State. Malnourished, dehydrated and showing no signs of violence, they appear to have wasted away until death overtook them. Then, they were interred in the caves, each with flowers left with them, at an average of once every year or so.

The caves are hard to get to, and located near a breathtakingly beautiful place called The Blue Lake, and Pat thinks it is the beauty of the place which led him to bring the bodies there. She describes how she believes Gordon had a hideous life since childhood; that he was born a gentle, caring, artistic child who was treated abysmally by one or both parents. She says they would have said things to him like: “Your bloody useless Gordon, why can’t you ever do anything right Gordon, you’re not trying hard enough Gordon.” She further thinks he wanted to follow his artistic ideals but received nothing but criticism and ridicule from the two people who should have encouraged it.  They stifled him, yet he is too downtrodden to resist or even speak up for himself. Instead he develops his passion for beauty in things like gardening and collecting things which to him signify true beauty. Pat predicts he has a secret room where he can indulge himself and enjoy all the beautiful things he isn’t permitted outside his secret world. He will collect things like African Butterflies, postage stamps, or porcelain dolls, paintings – anything which allows him to forget how ugly his real life is. He lives in a fantasy world, far removed from his real life.

She goes further, by saying Gordon tried to escape when he married, but being so meek and mild he would have attracted a dominant woman, and for him, it would have been a case of out of the frying pan, into the fire. She will be even worse, she predicts than his parents were, and she forbids the beauty he craves which is denied him.

And so, Sargent Rick McCoy, with Patricia Holmes and the rest of the task force hunt a man addicted to beauty. They believe when he came across each stunningly beautiful young girl, he had to own and possess them, to capture the very essence of them, to idolize them. But when they were imprisoned, they were no longer free, and they ceased to be what they were before he took them. They slowly lost the one thing that he craved from them: their beauty.

Meanwhile Rick and Pat are each fighting their own cravings. They are married, yet the more they work together, the more they are attracted to each other, and the more they want to take the irrevocable step, from friendly, flirting work colleagues, to lovers. But if they do, what will the effect be on their relationship, and their marriages?

There are many dark clouds on Rick and Pat’s horizon; a storm is coming. Solving the beautiful deaths will be the least of their problems. The storm has a name: PPP; the serial killer locked away by them in a mental hospital. He is plotting his escape, and revenge.

Glimpse, The Beautiful Deaths is released by Amazon on April 10th the link is: https://www.amazon.com/dp/B07P51GVCL/ref=cm_sw_em_r_mt_dp_U_gqjDCbYS0GQ5R 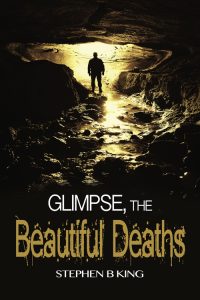